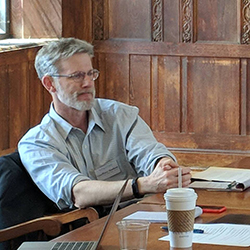 He has taught broadly in the areas of ancient western and medieval history, at both the undergraduate and graduate level. He has published broadly on the area of Roman family history, focusing on the period of Late Antiquity.  These include The Family in Late Antiquity (Routledge 2000) and more recently Mediterranean Families in Antiquity (with Sabine Huebner, Wiley-Blackwell 2017). He has won several awards, including most recently as a NEH Summer Scholar in 2017.  He currently is working on two research projects: one focusing on refugees in the Later Roman Empire and a cultural biography of the late Roman/early Byzantine aristocrat Anicia Juliana.