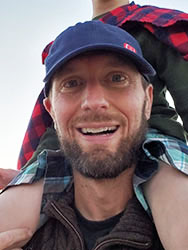 Dr. Edward J. Blum is professor in the History Department at San Diego State University. He received his B.A. from the University of Michigan and his M.A. and Ph.D. from the University of Kentucky. He is the author and co-author of several books on religion and race throughout United States history, including Reforging the White Republic: Race, Religion, and American Nationalism, 1865-1898 (2005; reissued 2015), W. E. B. Du Bois, American Prophet (2007), and The Color of Christ: The Son of God and the Saga of Race in America (2012). Blum is the winner of numerous awards including the Peter Seaborg Award for Civil War Scholarship, the Gustave O. Arlt Award in the Humanities, and the John T. Hubbell Prize for best article published in Civil War History in 2015.

Blum, Edward J. The Color of Christ: The Son of God and the Saga of Race in America