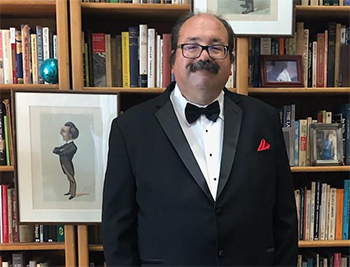 Professor Ed Beasley, PhD (UCSD 1993), FRHistS, studies Victorian England. His first two books looked at the backers of a pro-imperial pressure-group (Empire as the Triumph of Theory: A Study of the Founders of the Colonial Society of 1868, 2004), and how certain ways of thinking about politics and anthropology fed into British imperialism (Mid-Victorian Imperialists: British Gentlemen and the Empire of the Mind, 2005). His third book (The Victorian Reinvention of Race: New Racisms and the Problem of Grouping in the Human Sciences, 2010), looked at how social thinkers, when they are trying to divide the peoples of the world into categories in order to understand them better, sometimes fall into the trap of setting up racial stereotypes. The book examined the thinking of Alexis de Tocqueville, Walter Bagehot, and Charles Darwin, among others, at a time in the mid-nineteenth century when racist ideas were becoming more common in Great Britain.

Beasley's most recent book (The Chartist General: Charles James Napier, The Conquest of Sind, and Imperial Liberalism, 2016) is a biography of a nineteenth-century military officer who supported the cause of social revolution within the British Isles and imperial expansion abroad. He ruled part of Greece and conquered what is now Southern Pakistan. Beasley's current book project is about nineteenth-century discoveries about diabetes and its effects on the mind. Later, Beasley plans a book on how the size of the world was perceived in Victorian England.

Prof. Beasley enjoys teaching as much as research. The craft of history means looking at the rich record of human life and finding meaningful patterns and stories about how different people have tried to live in the world. Beasley enjoys helping students through that process of searching for evidence and patterns, and then framing well-expressed arguments of their own.