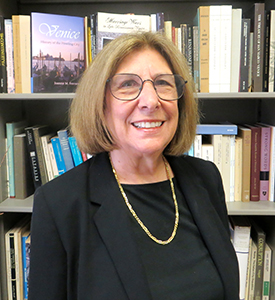 Joanne M. Ferraro (PhD UCLA, 1983), the Albert W. Johnson Distinguished Professor of History Emeritus,  is an historian of Renaissance and early modern Europe.  Her courses emphasize social and cultural history as well as sex and gender in historical perspective.  A specialist in the history of marriage and the family in Italy, she has published numerous articles in the US, UK, Slovenia, and Italy, including the J of Modern History, J of Social History, and the American Historical Review (2018). She is a contributor to Charles Scribner and Sons' works on the History of the Renaissance, European Social History, and the History of Childhood. Her monograph Family and Public Life in Brescia, 1580-1650 (Cambridge, 1993; paperback 2002), reviewed in several countries, was republished in Italy as Vita privata e pubblica a Brescia (Morcelliana, 1998). Her monograph, Marriage Wars in Late Renaissance Venice (Oxford, 2001) won first prize from the Society for the Study of Early Modern Women as well as the Helen and Howard R. Marraro prize for the best book published in any period of Italian history in 2001. In 2008 Ferraro published Nefarious Crimes, Contested Justice: Illicit Sex and Infanticide in the Republic of Venice, 1557-1789 with Johns Hopkins University Press andin 2012 Venice: History of the Floating City, Cambridge University Press.  Ferraro has received fellowships from the National Endowment for the Humanities, the American Council of Learned Societies, and the Gladys Krieble Foundation.  At SDSU she has been recognized as a Phi Beta Kappa lecturer and was the recipient of the 2010 Faculty Alumni Award (the “Monty”) for the College of Arts and Letters.  She serves as President of the International Friends of the Marciana Library in Venice.  Currently, she is the editor of a six-volume series on the Cultural History of Marriage from Antiquity to the Present and the volume editor for the Cultural History of Marriage in the Renaissance and Early Modern Age, both to be published by Bloomsbury Academic in 2019.