Center for War and Society

Gregory Daddis joins the San Diego State University College of Arts and Letters history department this fall as the new director of the Center for Military History (CMH) and as the first USS Midway Chair in Modern U.S. Military History.

The appointment follows a nearly year-long, national search. In June 2019, during a joint news conference aboard the USS Midway, the USS Midway foundation announced a $3 million, five-year pledge to create and fund the endowed chair position in U.S. military history at SDSU.

With this appointment, SDSU is the only public university on the West Coast with an interdisciplinary program in modern U.S. military history.

“Military history literacy is vital to informed public discussions of international relations, diplomacy, foreign policies, and ultimately freedom in America and abroad,” said Mac McLaughlin, President and CEO of the USS Midway Museum. “This pioneering academic program will place service in uniform — and by extension service to community — in a context that educates and inspires future generations.

“Our foundation’s partnership with SDSU is one measure of the museum’s commitment to investing in education at every level,” he added.

Daddis will help leverage the shared vision of both SDSU and the USS Midway Museum by broadening the scope of important scholarly research, interdisciplinary teaching approaches, and impactful public engagement related to military history.

He aspires to help build an academic and professional forum for SDSU faculty and students, Southern California community leaders, and national policymakers to engage in vital questions on peace, conflict, and security.

Daddis, who grew up in New Jersey and later attended West Point, holds an M.A. in history from Villanova University and a Ph.D. in history from the University of North Carolina at Chapel Hill. He served as Chief of the American History Division in the Department of History at the U.S. Military Academy at West Point for five years, and his most recent post was at Chapman University, where he was the director of the nationally recognized War and Society graduate program.

Following graduation from West Point, Daddis was commissioned as an armor officer in the U.S. Army He served 26 years before retiring as a colonel. Daddis served in Operations Desert Storm and Iraqi Freedom, as well as in Korea, and in numerous posts across the United States.

“As a military historian, having served in uniform has challenged me to think about the possibilities and, more importantly, the limits of U.S. military power abroad,” Daddis said.

“For me, it’s important that we teach with an eye toward instilling practical knowledge and skills in our students.”

Daddis specializes in the history of the Vietnam Wars and the Cold War era and has authored four books, including, most recently, Withdrawal: Reassessing America’s Final Years in Vietnam with Oxford University Press. He has also published several op-ed pieces on current military affairs in such publications as The New York Times, The Washington Post, the Los Angeles Times, and The National Interest magazine. His latest book, scheduled for publication by Cambridge University Press in fall 2020, is titled Pulp Vietnam: War and Gender in Cold War Men’s Adventure Magazines.

"Greg Daddis is a foremost international authority in the field of military history who has authored seminal works on the American war in Vietnam,” said Pierre Asselin, Professor and Dwight E. Stanford Chair in American Foreign Relations and current Center for Military History (CMH) Director. “Accomplished as he is, he remains incredibly nice and approachable. I've known him for quite some time and have always deeply respected him as a scholar and a human being. SDSU and our students in particular are really fortunate to have him join our ranks."

“San Diego has the largest military community in the free world, and Greg Daddis is a wonderful addition to the SDSU team doing research and teaching on military-related issues,” said Ed Beasley, Chair of the SDSU Department of History.

Daddis plans to demonstrate the strength of the humanities, so SDSU can become a national resource “that produces rational, intelligent advocates who help improve our national security strategy and larger foreign policy.” He said, “By studying the past, we’ll be better able to execute foreign policy in a holistic manner.”

“I want history to matter, not just for the past, but for the present and future,” said Daddis.

None at this time.  Please check back once the fall semester gets underway.

Fighting the Great War at Home: World War I and the Black Freedom Struggle

Duke Univeristy History Department, and author of Freedom Struggles: African Americans and WWI, will speak about the Buffalo Soldiers and other African American soldiers in WWI and how service at home and abroad contributed to the long black freedom struggle.

Public Lecture - The American Way of War:  A Retrospective

For three decades the term “American Way of War” was largely restricted to academic discussion of Professor Russell F. Weigley’s 1973 history of military strategy.  In the late 1990s it suddenly emerged as a catch-all phrase in the defense analysis community among those seeking to transform the nation’s military forces.  Advocates claimed that new technologies and doctrines allowed a “New American Way of War” that would be rapid, decisive, and almost bloodless.  This revolutionary ‘way’ of war would not only ensure U.S. military supremacy, but could spread American values and institutions across the globe. To some, the “New American Way of War” underlay the American military operations in Iraq and Afghanistan.  The approaching half-century anniversary of the publication of The American Way of War provides an opportunity to reflect on its impact.  Does Weigley’s thesis still provide a means to understand national military strategy?  How did an academic’s thesis on national strategy become so politicized?  Is there an American Way of War?

Brian McAllister Linn is the author of Elvis’s Army: Cold War GI’s and the Atomic Battlefield (Harvard, 2016); The Echo of Battle: The Army’s Way of War (Harvard, 2007); The Philippine War, 1899-1902 (Kansas, 2000); Guardians of Empire: The U.S. Army and the Pacific, 1902-1940 (North Carolina, 1997); and The U.S. Army and Counterinsurgency in the Philippine War, 1899-1902 (North Carolina, 1989).  He is the recipient of a John Simon Guggenheim Fellowship, a Woodrow Wilson Fellowship, and an Olin Fellowship at Yale University.  He has been a visiting professor at the Army War College and a Fulbright Fellow at the National University of Singapore and the University of Birmingham.  He is the past president of the Society for Military History. 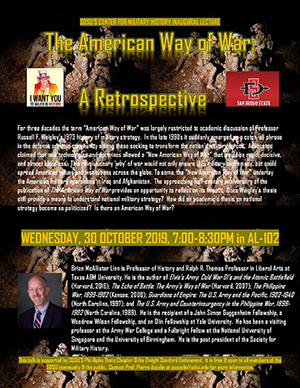 A new, specialized course in the Military History of WWII in the Pacific, in partnership with the USS Midway Museum is being offered this fall.  The course explores the motivations, events, and legacies of the wars in East Asia and the Pacific between 1937 and 1945. It examines the fears, ambitions, national policies, and the prosecution of war aims among the combatant nations. From how the Sino-Japanese conflict led to war with the United States, to the Pearl Harbor attack, Midway, and the struggle for the South Pacific, to the U.S. home front, the return to the Philippines, and how the war ended with the dawn of the atomic age. Assessment of military strategies and cultural perceptions highlight the choices made by not only the national leaders, but the young men and women who bore the brunt of the conflict that still defines relations in East Asia today.

San Diego State University will soon be the only public university on the West Coast with an interdisciplinary program in modern U.S. military history. Announced during a presentation aboard the USS Midway on Tuesday, June 11, the USS Midway Foundation has made a $3 million, five-year pledge to create and fund an endowed chair in modern U.S. military history at SDSU.

Midway’s board of directors unanimously approved its foundation gift during a meeting on Thursday, June 6, 2019. The USS Midway Chair gift is the single largest gift received by the university’s College of Arts and Letters. The endowed chair will sit in the college’s Department of History.

If you would like to learn more about this new endowed Chair or SDSU's Center for Military History, please contact Keely Bamberg, Sr. Director of Development, at [email protected].

Learn more about the partnership